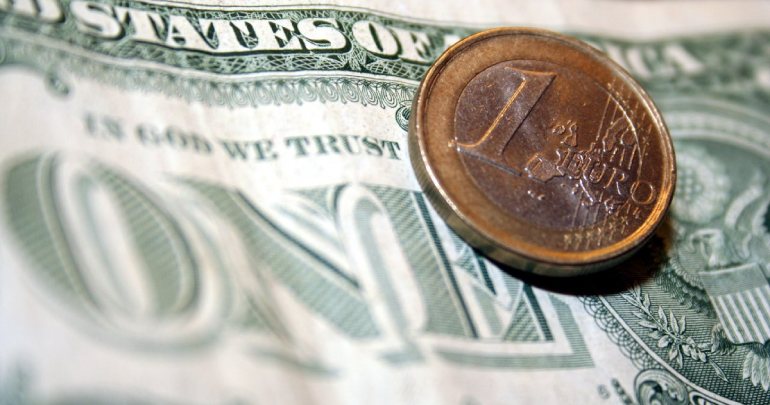 You have probably already seen in the news that the US dollar has increased in value relative to the euro, reaching parity with the euro for the first time in the last 20 years. That is, since the euro came into circulation in 2002, it has always been above the dollar, at an average rate of approximately 1 EUR = 1.30 USD. Currently, the dollar is worth practically the same as the EUR (1 EUR = 1.01 USD at the time of writing this article), even surpassing it in some markets on previous days. This chart, taken from the Xe.com website, illustrates it perfectly:

Now is when you ask yourself: but, hey… Do you teach languages or economics? Sorry, we’re not going to win a Nobel Prize for either. But we want to give you some tips on how this can benefit you if you plan to learn French in France.

Disclaimer: This article does not constitute financial advice of any kind. Before making any decisions with your money, talk to a professional financial advisor.

Who benefits from dollar-euro parity?

Before you read on, you may also be wondering if this can be good for you. To cut to the chase, this benefits you more directly if you live in one of the 12 countries in the world that use the dollar as legal tender which are: the United States, Ecuador, El Salvador, Zimbabwe, The British Virgin Islands, The Turks and Caicos, Timor and Leste, Bonaire, Micronesia, Palau, Marshall Islands, and Panama.

If, on the other hand, your country does not use the dollar, as is the case with the vast majority of nations, this might also be good if you’re planning to travel abroad, but it could also be bad or not affect you at all. In economics, things are usually much more complex, as opposed to languages that are easy if you like them.

Currency exchange rates are made between countries’ pair currencies and do not have the dollar as a reference (although the dollar affects the whole economy indirectly). They depend on several factors, such as market supply and demand for each currency, inflation and interest rates, the “health” of each country’s economy, and its foreign currency reserves, among others. Therefore, if the euro goes down compared to the dollar, it does not necessarily mean that it will go down compared to your country’s currency. For example, this is the chart of the euro relative to the Swiss franc over the same period:

In some countries, especially developing countries, the indirect effect of this phenomenon may be more noticeable in the short term (volatility), because most of them have debts in dollars so their governments have to intervene, increasing or reducing their dollar reserves, to prevent speculation from generating an even greater depreciation of their currency in relation to the dollar.

This same financial speculation may lead to a greater demand for dollars than for euros in the short term in different countries, causing the value of the Euro to also fall in the local currency, or to have more volatility.

How can a weak euro benefit you?

To put it simply: if you are paying with dollars, you can now buy more euros with the same amount of dollars. Imagine you expect to spend about $1,000 to come to France. Some time ago, you would buy 700 euros with that money. Now you buy about 1000 euros. And with those euros, you can buy more things here now than you would buy before.

If your country’s currency is not the dollar, we recommend that you talk to a financial advisor for guidance on how to take advantage of short-term fluctuations to choose the best time to travel.

Therefore, in addition to other reasons that we will see below, this moment is perfect if you were already planning to take a French immersion course abroad.

Why is this happening?

As with everything in economics, there is a myriad of factors. The most immediate cause is the US interest rates. The inflation rate in the United States, as in so many other countries, is at its highest level since 1981.

In an attempt to reduce inflation, the U.S. Federal Reserve (Fed) is progressively raising interest rates. Interest is the cost associated with the risk of money, the additional value that a person or institution (especially banks) charges others for lending money. When interest is low, the amount of savings decreases, because its remuneration is smaller, so people prefer to consume more instead of saving, and they can also get cheaper loans to buy. On the contrary, with higher interest rates, consumption decreases for the same reason.

Well then. According to the Quantitative Theory of Money (by Irving Fischer), the financial economy interacts with the real economy by the following formula:

M = Money supply (how much money Governments print).
V = Velocity of money (which measures the frequency at which one unit of currency changes hands).
P = general price level of the economy
Q = Sum of all goods and services produced in the economy, the real GDP (Gross Domestic Product). Multiplying P * Q gives us the so-called nominal GDP, but this is another story.

With high consumption, since V and Q are constant in the short run, P depends exclusively on the money supply. In other words, if central banks print more money, there is more money to buy the same products, and by the law of supply and demand prices rise. The generalized rise in prices is called inflation. So, as economist Milton Friedman pointed out, inflation is a monetary phenomenon. Therefore, governments are almost entirely to blame. Don’t be fooled into thinking otherwise.

It turns out that for years, governments have been increasing the money supply (since the 2008 crisis). When the COVID-19 confinements came, they had to print money like there was no tomorrow to keep the economy afloat. Added to this, have been the logistical problems and the superconductor crisis associated with the Pandemic, and more recently the high oil, gas, and fertilizer prices due to the war in Ukraine. But these are temporary factors, which would not have triggered high inflation on their own.

This year, with higher interest rates, investors prefer to use their resources to buy more U.S. Treasury bonds, which are safer but less profitable, rather than investing in more profitable but much riskier options, such as stocks or cryptocurrencies. And since those bonds are bought in dollars, the dollar goes up. Et Voilà, it’s all clear.

History has shown us that raising interest rates is effective in controlling inflation. The question is, to what extent should it be raised? It will depend on how much the economy suffers. Higher interest rates for too long can generate recessions, and this is in (almost) nobody’s interest. Therefore, it is to be expected that by next year inflation in the United States will decrease, and with it the price of the dollar. It would be more expensive to come to Europe again.

But economists and governments do not have a crystal ball to foresee the future, if they did, the present would not be as it is :-). What we do know is that now there is optimism and developed countries are growing. A desire to enjoy life and to travel as we have not seen for a long time. France is full of tourists again, with everything running smoothly.

According to the famous investor Warren Buffett, the best investment you can make is in yourself. If, like many people, you have also been saving during the pandemic, why not invest in yourself now and learn French in France? Money comes and goes, but what you learn will last a lifetime and give you return in the future (including money :-).