Travel to the heart of the Middle Ages, open the doors of time!

Aboard a time machine, the language immersion can also be historical!

Randon, an Anglo-American student living in London, had the magical experience of imagining himself in the shoes of a lord, a troubadour, a builder… some eight centuries ago. On the borders of Périgord and Gascony, the castles stand proudly above the rivers, fields and forests. There, time has stopped. With a little imagination, you can hear the creaking of the portcullis opening the access to the castle and the sound of carts entering the castle’s bailey. When you arrive in this large courtyard, you will perceive, like Randon, the noise and agitation of all the craftsmen and peasants who were present and essential to the activity and functioning of a powerful fortress: the hammering of the blacksmith, the cackling of the poultry, the barking of the many dogs, the cries of the pigs, the steps of the horses on the cobblestones, the conversations of the peasants with the servants of the lord who had come to buy the vegetables, meat and fish necessary for the preparation of a banquet. These castles were full of life!

Taking the majestic stairs, Randon reaches the high court where the atmosphere is quite different. Here, Randon, neither peasant nor craftsman, this is the private domain of the lord! Don’t you hear a lute tune coming from the lord’s lodgings? It is undoubtedly, the wife of the lord Pierre de Gontaut, the master of the place, who practices her instrument surrounded by her ladies of company? 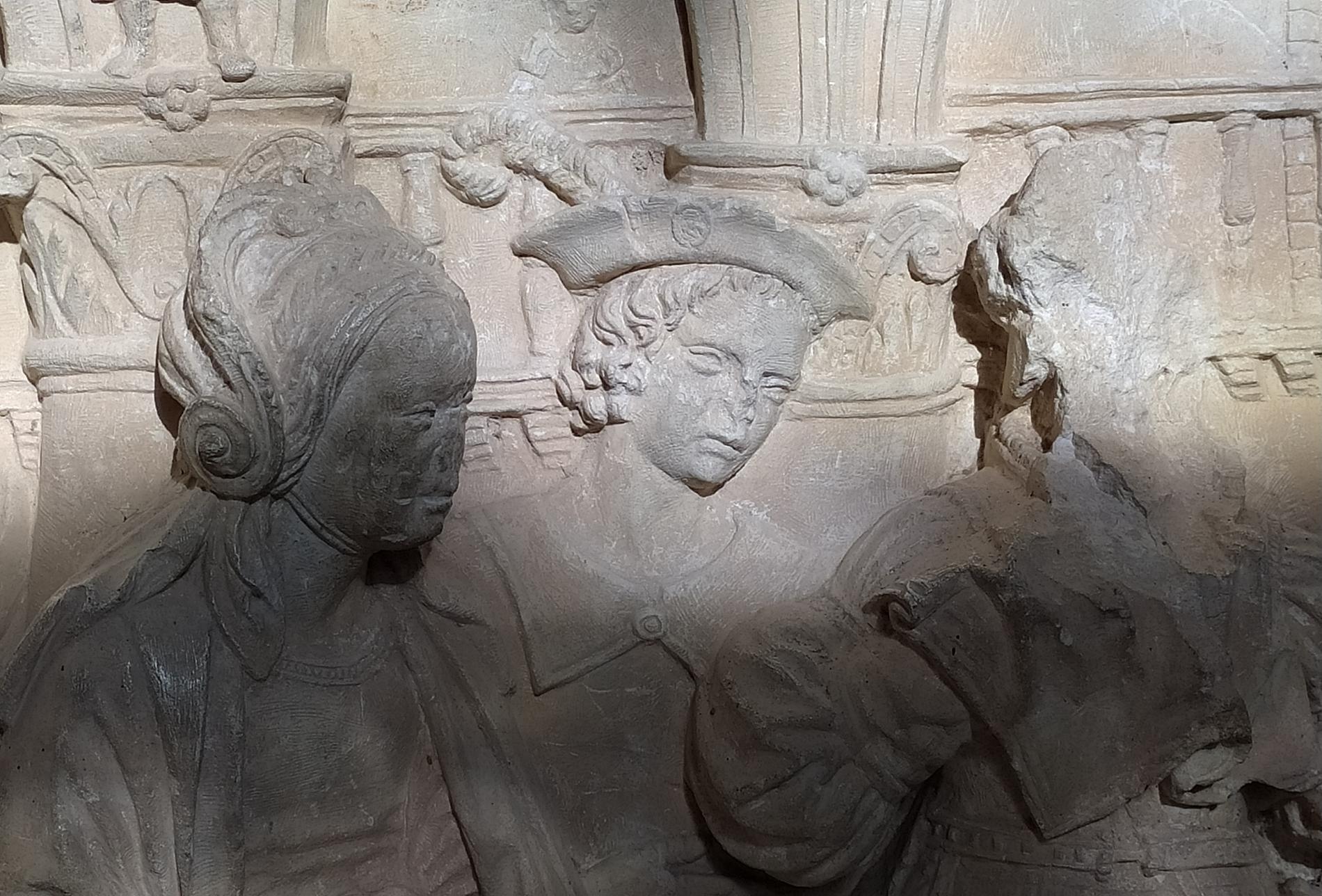 Let’s go in the dungeon, dungeon because yes, the “donjon” does not mean in French this dark prison but the tower where the family of the lord lives. We climb the spiral staircase, built with the beautiful local limestone, which leads us both to a vast room where the lord’s family usually lives.

Here, where are they? Where is Dame de Gontaut who was just playing those magnificent lute notes? The room is immense and empty! In the beautiful carved fireplace, the fire is out! Fortunately, the weather is still mild in October, but imagine in the heart of winter, this large and freezing room… Brrr…

Maintaining the fire was an essential task, entrusted of course to the many servants. The castle is still surrounded by forests where the woodcutters could cut the precious wood to feed the numerous large fireplaces in each of the living rooms of the lordly residence.

Let’s leave this deserted place to climb to the top of the keep. What a view! Isn’t it Randon? Pierre de Gontaud and his successors must have often contemplated this landscape and thus seen in the distance if enemy troops were approaching!

During the terrible Hundred Years’ War, when the Kings of France were opposed to the Plantagenets, Kings of England, the castle had to undergo numerous attacks and sieges.

This, the lord Malrigou de Bideran, rallied to the English, gave the order in 1447, to set fire to the castle. You can still see the scorched stones of the tower which testify of this fire. Look at the traces of this fire, still visible after nearly six centuries!

Finally, this interminable war ends a few years later, the French “push” the English out of France and the Gontauts, lords of Biron, reinforce their power giving all its splendor to the castle, building more comfortable houses during the Renaissance and the following centuries. Gone are the wars, replaced by a castle life made of amusements and entertainments. The castle was surrounded by parks and gardens and a superb gallery was built where the ladies and gentlemen could enjoy a dazzling view of the countryside. 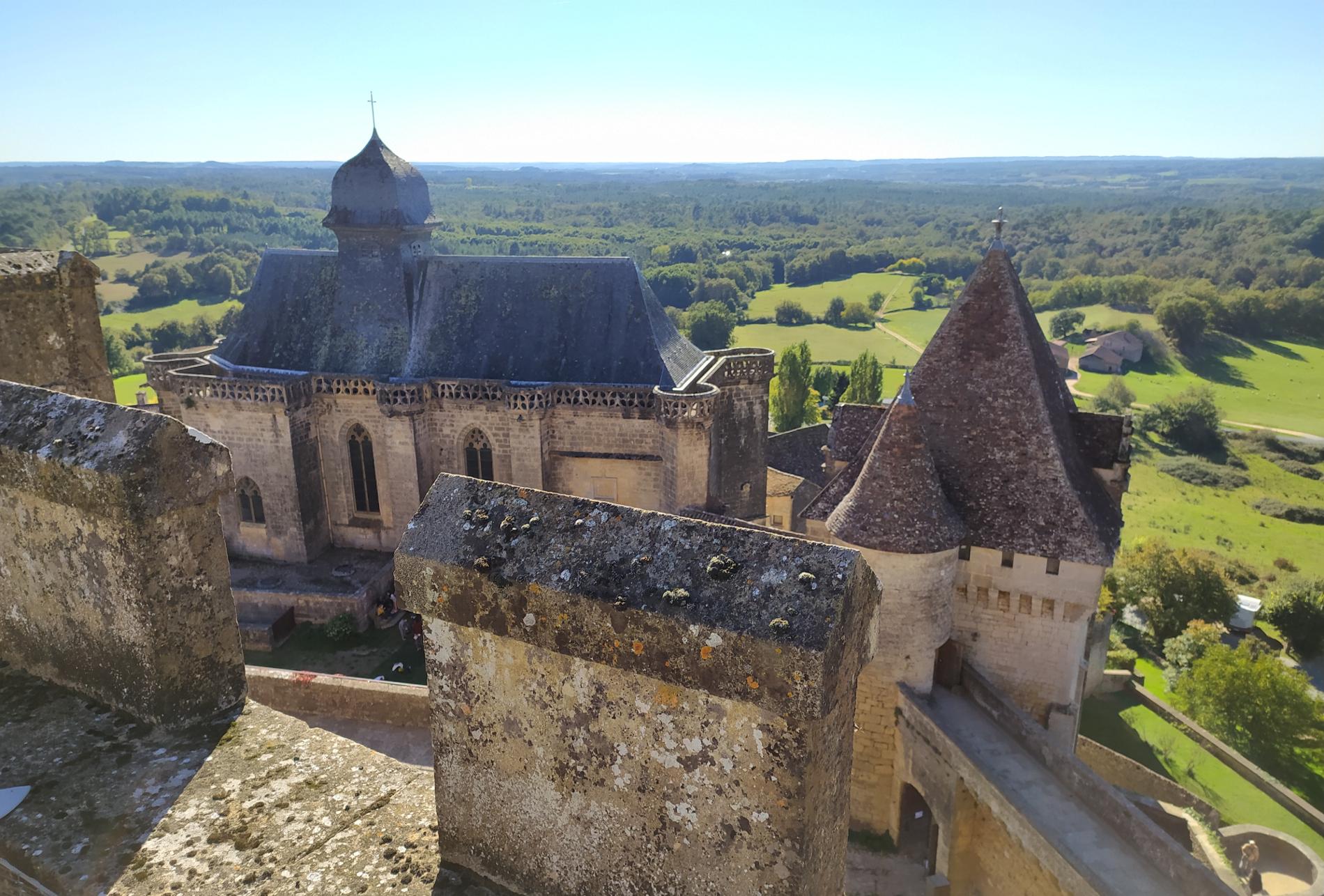 In the century of Louis the Fourteenth, the famous Sun King who built the famous Château de Versailles, the Lords of Gontaud divided their time between Versailles and their Château de Biron, and the same was true in the following century, the so-called Age of Enlightenment. Look at Lisa, my previous student, under this gallery opening a fantastic view on the landscape north of the castle!

No wonder the peasants revolted later in 1789! The revolutionaries attacked every castle in France. The castles were a symbol of the oppression they had suffered for centuries. They very often damaged the statues, the sculptures as you can see on the following picture. It is a face of the tomb of one of the lords of the castle, Pons de Gontaut. This tomb is located in the manor church of the castle. One can notice that two of the sculpted figures have lost their noses while the third has lost his head! 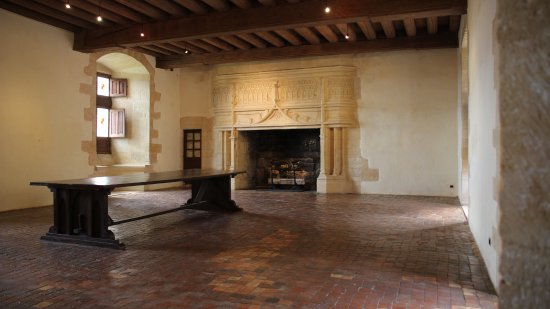 It was not funny at the time! Well, Randon, how about coming back to the twenty-first century and enjoying a good meal in a restaurant at the entrance of the beautiful Bastide de Monpazier? It’s nice, in the shade of the beautiful wisteria, with this beautiful autumn sun. And then, the duck breast was delicious!

To finish, a small tour in this beautiful Bastide which was founded by the English in 1284, under the reign of Edward I but that is another story! You should know that this Bastide was used as a shooting place for Ridley Scott’s last movie, The Last duel! A film you must see!