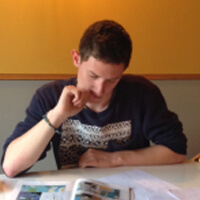 Having a problem learning French?

We have all known the worries of a completely new language.

Are you scared of speaking French? Try first to understand in what way and why.

Do you not dare start a conversation? Gain confidence by taking initial small steps (« petits pas »). Start with simple and gradual things. For example, ask someone the time, even if you do not need to. Another day ask directions to a street (which you know); another time, go into a shop: « Bonjour, avez-vous un… ? ». Just so many small bets on yourself you will win day after day. And don’t worry: you will often find people who initiate conversation for you!

You think you know the language. However, you do not understand anything that a French person in the street says to you! That’s normal. Everyday French speech actually suppresses the silent « e »s, makes liaisons which deceives the ear, does not enunciate and often merges words. Sometimes it even shows contempt for grammar. Some examples? « Patt’quoi » really meaning « Pas de quoi », « Caisse tu fais ? » for « Qu’est-ce que tu fais ? », « çass’sent » for « ça se sent », « j’laime pas» for « Je ne l’aime pas », etc. And let’s not mention the various accents you can come across, depending on the province or country of origin of the French person you meet! There is just one solution to getting on: smile, another smile, always a smile! Say politely to the person you are speaking to « Excusez-moi, mais je ne comprends pas ». Ask them to speak more slowly and to enunciate. Then tell yourself you just found another good way to start a conversation!